This section of the pamphlet introduces a number of model itineraries designed to allow you to explore not only the backdrop of the Japan Heritage story “Living with Whales,” but also other sights in the Kumano area. We start with a two-day, one-night itinerary that includes a visit to the Sacred Sites and Pilgrimage Routes in the Kii Mountain Range, a World Heritage site. Get ready to bathe in famous hot springs, enjoy local delicacies, and experience the unique appeal of the Kumano region.

On the first day, you’ll head north along the Kumano Sea from Kushimoto Town at the southern tip of Honshu. You’ll tour the town of Taiji, known for its history of whaling, and spend the night at Katsuura Onsen.

Your first destination, a series of pile-shaped rocks known as Hashigui-iwa Rock, is one of the most scenic spots in Wakayama Prefecture. A string of more than 40 column-shaped rocks of various sizes stand in the blue ocean as the rising and falling of the tides and the position of the sun create a scene of beauty that shifts continuously throughout the day.

The rocks look like the piles of a bridge because they have been eroded by the constant action of the waves until only the hardest portions of the material remain. The site has been designated as a Natural Monument by the Japanese government and selected as one of the Nanki Kumano Geopark’s geosites.

Next, you’ll drive northeast on National Route 42 from Hashigui-iwa Rock until you see the islands of Kuroshima and Taijima in the Kumano Sea on your right. It is said that these uninhabited islands, which lie about 1 kilometer out in the estuary of the Koza-gawa River, once served as a base for the Kumano Navy. In addition, Kuroshima Island, which is the larger of the two, is revered as a sacred spot that figures in the ceremonial boat passage of the Mifune Sacred Boat Ritual, Kochi-matsuri Festival, which is part of the Kumano Sea’s whaling culture. Taijima Island is named for its resemblance to a sea bream, or tai in Japanese.

Next, you’ll leave Kuroshima Island and Taijima Island to drive toward Taiji Town, which is considered to be the birthplace of traditional whaling and where people still hunt small whales along the coast. Many restaurants in the town serve whale-based cuisine that has been passed down through the generations as part of a dietary culture that is distinct to Kumano—and indeed, Japan. First, you’ll enjoy lunch at Isana-no-yado Hakugei.

After lunch, you’ll tour the Taiji Whale Museum, and then you’ll head for Tomyo-zaki Point, which served as a highland lookout from which the traditional whale hunt was directed. From these cliffs, which afford panoramic views of the Kumano Sea, people long ago searched for whales.

When they found them, they signaled groups of ships in the waters off Taiji by lighting fires and other means. This “command center” was the most important facility in whaling, and only the individuals in the whaling clan with the most power and authority could direct the hunt.

Today, Tomyo-zaki Point is home to a restoration of an old-fashioned lighthouse known as Tomyodai as well as a restored whale lookout. The Lighthouse Site and Lookout Site along with the Lookout Rest House Site and Smoke Signal Site are cultural properties that are part of this Japan Heritage story. Once you’ve envisioned how traditional whaling was carried out at this scenic spot, you’ll head toward Katsuura Onsen, where you’ll soak in the famous springs to wash away the fatigue of the day.

Nanki Kumano Geopark has been recognized by the Japan Geopark Committee, which certifies regions with valuable topographical or geographical features as geological parks, or geoparks. Nanki Kumano Geopark, which covers areas in and around the nine municipal areas that make up the southern part of Wakayama Prefecture (the city of Shingu; the towns of Shirahama, Kamitonda, Susami, Nachikatsuura, Taiji, Kozagawa, and Kushimoto; and the village of Kitayama) offers visitors three distinct geological formations across 107 geosites (destinations) (as of August 2017) like Hashigui-iwa Rock. 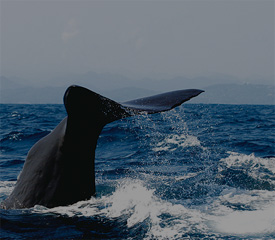 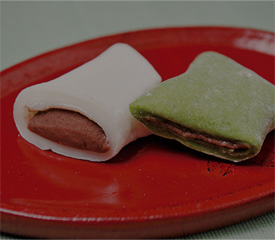 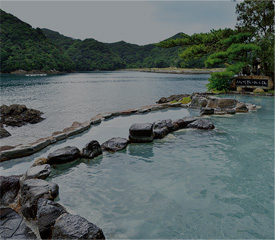 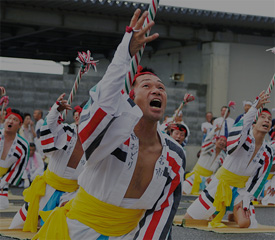